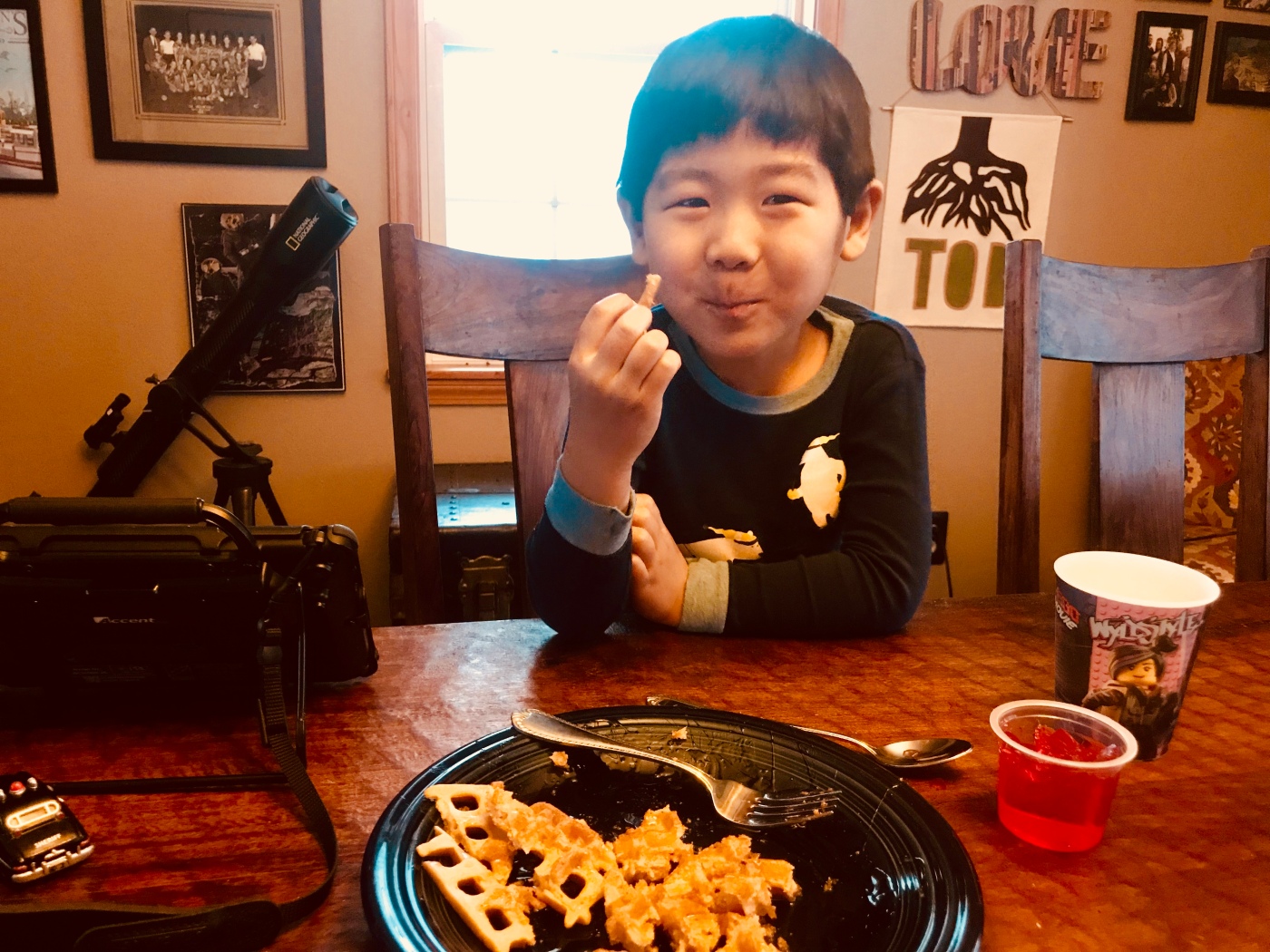 Growing up, I was scolded for one thing far more than any other—talking.

I’ve just always had so much I want to say. It’s like the valve between brain and mouth has always been open for me.

And the same is true for writing.

I remember I used to have this red felt-tipped pen and one of those one-inch, wide-ruled spiral notebooks with me wherever I went. I would write plays and short stories and poems and songs, from my earliest memories in elementary school.

I studied English throughout college. In a former life, I taught writing and speaking and theatre to high school students. I have served as a communication director for my church.

I’ve always felt the weight of the power of words and their ability to both create and to destroy.

Words are the very thing that seem to keep me from my son.

This fall Tobin received an additional diagnosis of verbal apraxia (also called Childhood Apraxia of Speech). Technically, he was diagnosed with profound verbal apraxia. To be completely honest and vulnerable, this means that the score on the assessment was so low that it didn’t even register a score.

And while I had suspected it for a while and pretty much knew it’s where things would land (just like the moment we received the diagnosis of autism), to actually hear the words and see the results was a heartbreaking moment, no matter how prepared I thought was.

The American Speech-Language-Hearing Association has this (and more) to say about Childhood Apraxia of Speech (CAS):

“To speak, messages need to go from your brain to your mouth. These messages tell the muscles how and when to move to make sounds. If your child has apraxia of speech, the messages do not get through correctly. Your child might not be able to move his lips or tongue to the right place to say sounds, even though his muscles are not weak. Sometimes, he might not be able to say much at all.

A child with CAS knows what she wants to say. CAS is a problem with her brain getting her mouth muscles to move, not with how well she thinks…”

Autism is a huge barrier to Tobin communicating. It has him sort of “locked up” in his mind and we all work hard to help him come out. And he does come out and it is wonderful. He is more and more present and connected all the time.

But once he “unlocks,” Tobin has the SECOND barrier of apraxia.

It’s like the valve that has always been so open for me is closed so tightly for him.

He has two tight valves that need opened before the words can flow.

One of my favorite things to do with Knox is to do a “favorites interview.” I think our earliest one is from when he is three. I ask him a series of “what’s your favorite_____” and he answers the questions and we laugh and giggle back and forth on his responses.

I love these videos. I can go back and watch them and remember and relive. I love seeing him grow into the person he is becoming and having this video documentation of these sacred moments with him.

I hang on Knox’s every word. I always have. Because I can’t believe I get to be his mother. And I find him fascinating.

And I feel the exact same way about Tobin.

I wonder the big things: When he cries is it because his stomach hurts or his throat hurts or because he has put something in his ear canal? Do his new shoes hurt his feet? Is someone being mean or hurting him?

I wonder the small things: Does he like his bedroom sheets? What’s his favorite song? Who is his best friend? Did he like the soup I made last night or just eat it because I insisted?

This new diagnosis was huge and insightful.
(I’m one who would much rather know the truth—all of the truth—and then work with the truth than to put my head in the sand and pretend.)

Tobin has an absolutely amazing team at his school. And his speech therapist has been all over this from the beginning, from way before we had anything official.

The condensed version of the super long story is this:

Tobin assessed for an Augmentative & Alternative Communication (AAC) device. We received it on December 29 and—

It has been a game changer.

Tobin had already been working with a device at school, and from the moment I put the device into his hands, he began poking and pushing the buttons.

Knox clears out the pantry, offering all kinds of sweets to Tobin (which he thoroughly enjoyed!) but nothing was “black cookie.” Brian smiles “OREO!” I text his speech therapist, and she says that is how he requests Oreos during session with her.

Brian gets ready to leave to go to the store and says, “If you guys think of anything else I need to get, let me know!” And Tobin quickly pushes “Ice cream candy ice cream.”

This was within the first five minutes of having his device in his hands at our house.

We saw an immediate change in Tobin’s demeanor:

My sister came over to hang out with Tobin while the other three of us went to the movies. When I told Tobin, he ran upstairs to his closet, created a makeshift step stool, picked out an outfit and dressed himself. He’s never before shown any care about his wardrobe.

The next level of potty training we’d been implementing at the house (big boy undies until bedtime) got kicked up a notch. The three days prior we’d had accidents throughout the day. The night the device was delivered? Zero accidents. Zero. And he has continued this trend in the days following, getting more and more consistent, even beginning to go by himself!

He is looking up and out. And eye to eye.

He’s more present and engaged, even choosing to be with the kids when we have friends over instead of with the adults or by himself.

The volume on his constant jabbering has turned way, way up! He walks around the house smiling and shouting and pressing “ice cream” and “black cookie” and “Jello.” (No wonder he seemed mad so much of the time—we haven’t had any of the things he likes!)

Tobin has found his voice.

For example, for Tobin to request “eat chicken,” he has to press “eat” and then “eat” again. Then he presses “eat” then “meat” then “chicken.” Then he pushes the top of the screen and the voice will say “eat chicken.”

But he is getting it.

We all hopped in the car (at 8 p.m.) and got our boy a Happy Meal with chicken nuggets and apples and he smiled while shoving nuggets in his mouth the Whole. Way. Home.

My son has words.

And it’s changing everything.

People get hung up words. I know I do. Or did.

But if we had no word for “love” would it mean that love didn’t exist?
If we didn’t have words to describe the night sky, would it still be there?

I mean, if you and I call an object, an idea, or a feeling two different things, aren’t we still talking about the same thing?

I feel like I’m trying to write some sort of Shakespearean “a rose by any other name would smell as sweet” line, but I think, I dwell on this idea so much.

I’ve found myself getting more and more comfortable with silence.
I no longer have to be the one that fills the empty spaces in conversation. Because I now know it’s okay for us to just be in the silence.

And listening is so much better anyway.

The other day, Tobin and I read a book together.

Read. A book. Together.

As in, back and forth. Together. And my sweet friend was there to capture it on video.

It’s difficult to describe what it’s like to have a son who cannot speak.
So many questions. All the time.

To be completely honest, it has often felt like I’m talking to the air.
And admitting that breaks my heart and makes me feel sad with some shame.

And all that schooling, all those years in communication seemed to do nothing for me these past few years as I try and stumble and get up and take a step forward and fall five steps backward trying to navigate this road with my son.

I have been so angry with myself for lack of patience, for the inability to use what I’ve learned to bridge the gap between us.

This morning I wished my son “Happy Birthday” on his device.

I pressed the buttons on his “talker” and showed him where the buttons are to say “Happy Birthday.” We smiled and kissed and laughed and snuggled and all day long, Tobin has found a way to insert “birthday” into just about every request he has made.

It seems we both believe that birthdays are something that should be adequately celebrated.

Words have shown me that.

And today while I was baking his cake, Tobin sat at the kitchen table and pushed words about “snow” and “outside.” And I talked to him about how pretty it is and how it makes winter so much more bearable when the snowflakes cover everything. And he looked out the window.

And ever since that cake has been iced and on top of the refrigerator, Tobin has gone over to his device every ten minutes or so and pressed “brown cake dessert birthday” sometimes even adding a “please.”

And when I tell him we have to wait until after dinner, he has pushed “worst” three different times now.

But right now, I’m basking in the back-and-forth I’m experiencing with my son. I’m relishing these “conversations” we’re having, this unlocking we’re witnessing as he presses buttons to release what’s in his mind.

I’m witnessing the transforming power words can give.

And it’s so Good.